Groups featuring the right kind of internal dynamics perform well on a wide range of assignments, regardless of the sum or average individual cognitive abilities of the group’s members. According to study co-authored by researchers at the Massachusetts Institute of Technology, Carnegie Mellon University and Union College, group intelligence may not be quantified as the sum or average of the cognitive abilities of its members. 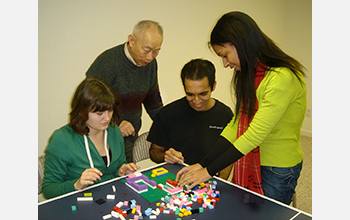 A team working on one of the tasks used in the study. Teams were asked to assemble complicated Lego® structures based on detailed instructions. Teams were randomly assembled by soliciting participation via Craig’s List.
Credit: MIT